Want to know which Space Marine line units will be at your command in Dawn of War III? Look no further! 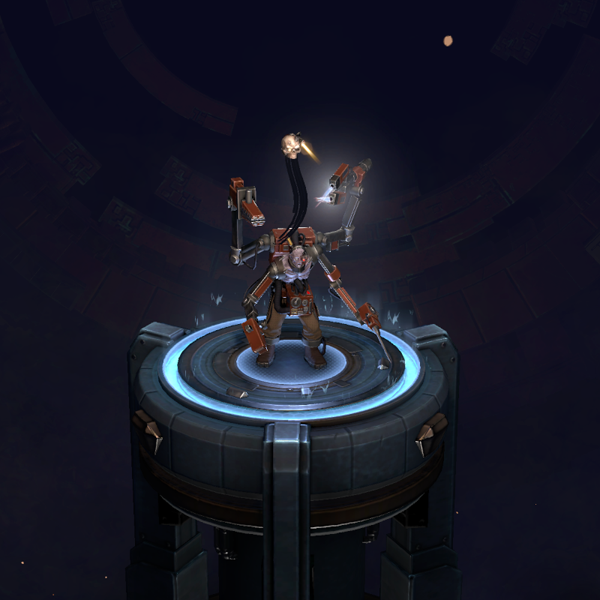 These mindless cybernetic drones are the grunts of the Space Marine army. Trusted only with simplistic tasks, the Servitor is a builder that helps support the army’s base building requirements.  Servitors can repair damaged vehicles and structures or detect enemy units in stealth – trading combat prowess for utility. 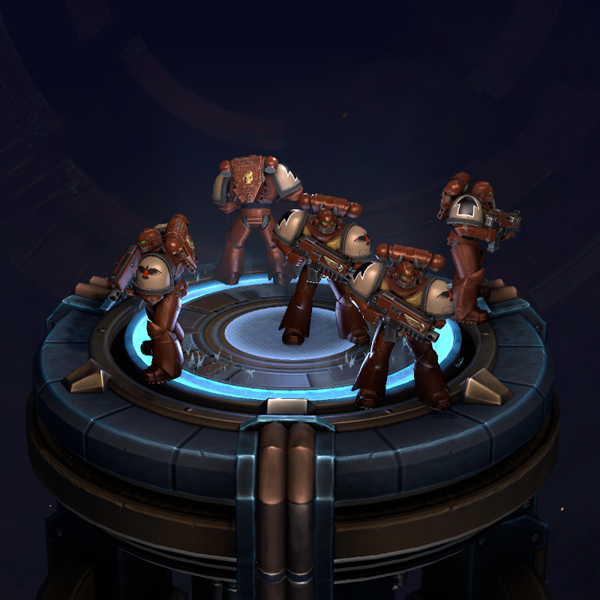 Just like their Assault Marine counterparts, Tactical Marines are also heavily armoured. Instead of specializing in melee combat, however, these units are often deployed to fight from a distance. Trained to wield a variety of different weapons, these ranged soldiers are capable of dishing out fire from a healthy distance.

Thanks to their elite training, Tactical Marines can also have their weaponry upgraded. These formidable fighters can either be taught to wield a Flamer – a gun that spreads fire damage over time - or can learn to deal deadly burst damage with a Plasma Gun. The choice is yours. 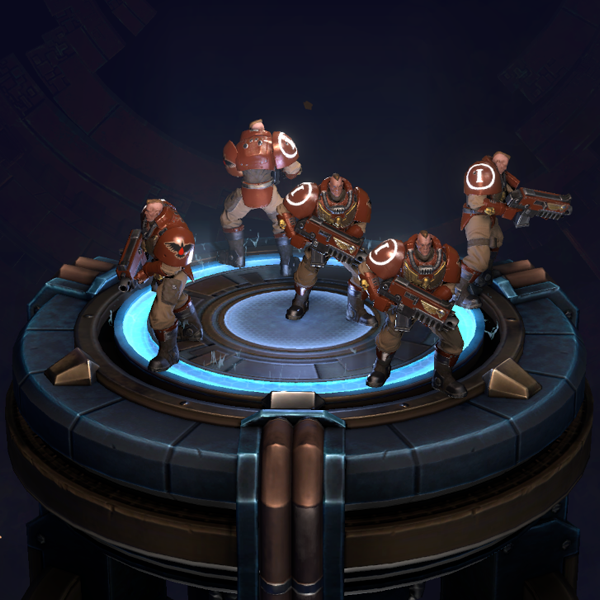 Forgoing the heavy armour of their Assault Marine brothers, these lightweight units specialize in stealth infiltration. Often operating behind enemy lines, these fearless fighters are known for laying cunning traps for unsuspecting foes. Using stun grenades and medium ranged weaponry, they are a brilliant choice for those looking to launch a surprise attack. With additional training, these competent killers can become even more effective, with an upgraded scout able to lay proximity mines across the battlefield. 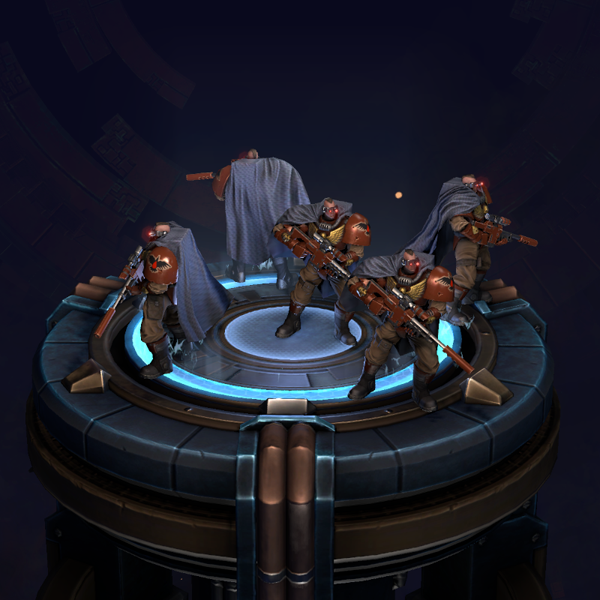 The Scout Sniper operates similarly to his medium range counterpart, but these eagle-eyed sharpshooters choose to attack from a long distance rather than sneaking through enemy lines.

Hulking behemoths that specialize in close quarters combat. Clutching a weapon in each hand, these armored infantry units can inflict devastating damage upon enemy squads, slowing the advance of multiple units at once by relentlessly charging at them. 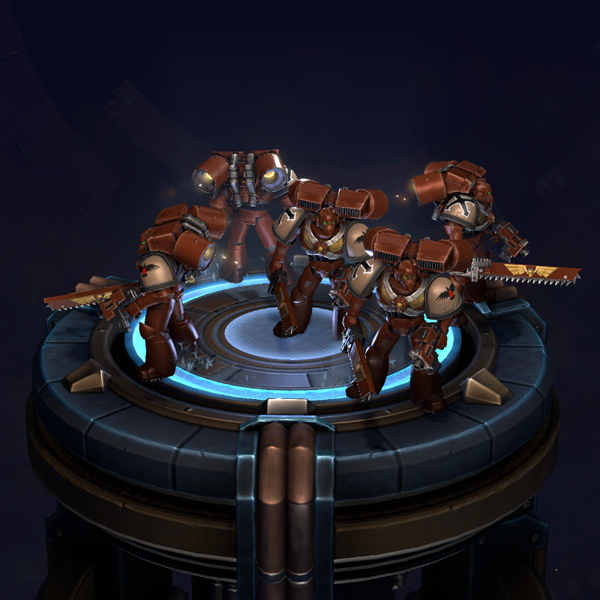 Equipped with jump packs, these adaptable Marines can easily jump to any position. Using their heft to their advantage, they can even send enemies flying thanks to their knockback. Known for decorating their armor with elaborate patterns, those who find themselves close enough to admire an Assault Marine’s paintjob rarely get the chance to admire anything else again. 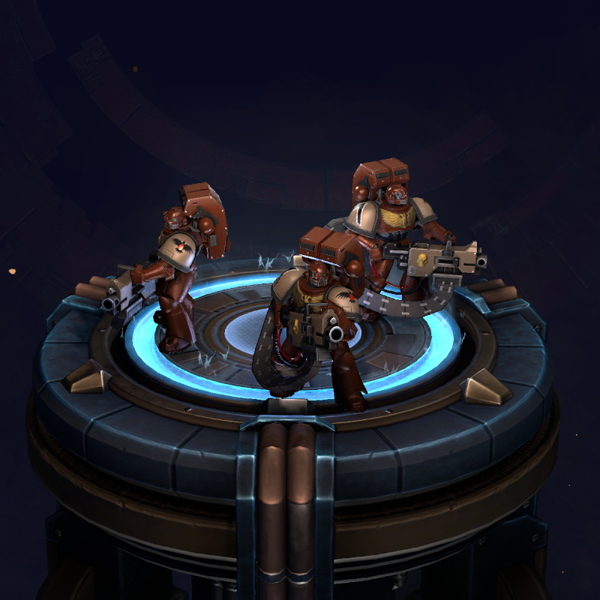 Also known by soldiers as the ‘backbreaker’ thanks to their considerable weight, Heavy Bolters are anti-infantry weapons that have to be setup before use. Once mounted and loaded, these hefty machine guns are renowned for inflicting serious damage on their foes, bombarding and slowing enemies within the area of impact. 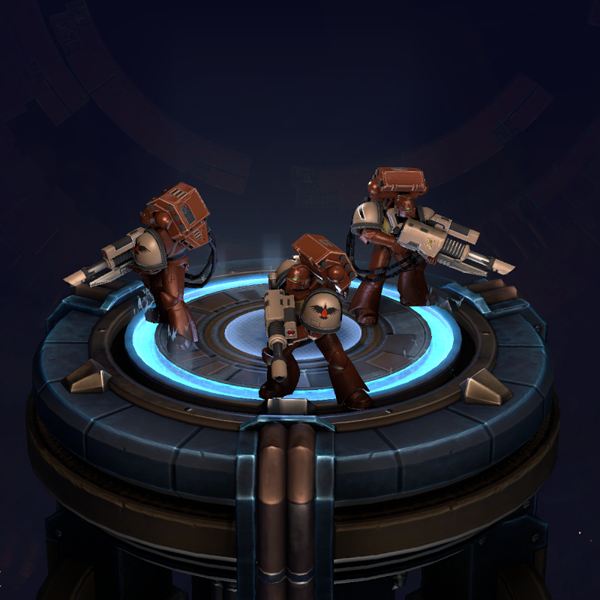 The second type of heavy weapon unit in the Devastator Squad eschew Heavy Bolters altogether in favor of the formidable Lascannon. These high-powered light cannons pack a serious punch, able to penetrate even the thickest vehicle armor. Unsurprisingly, this power comes at a cost. As well as being incredibly heavy, the Lascannon needs to be focused on a single target to realize its true potential. Persistent units, however, will have their patience rewarded, with the cannon’s damage increasing over time against a single target. Its deadly blasts are even more effective against the lightweight skimmer units. 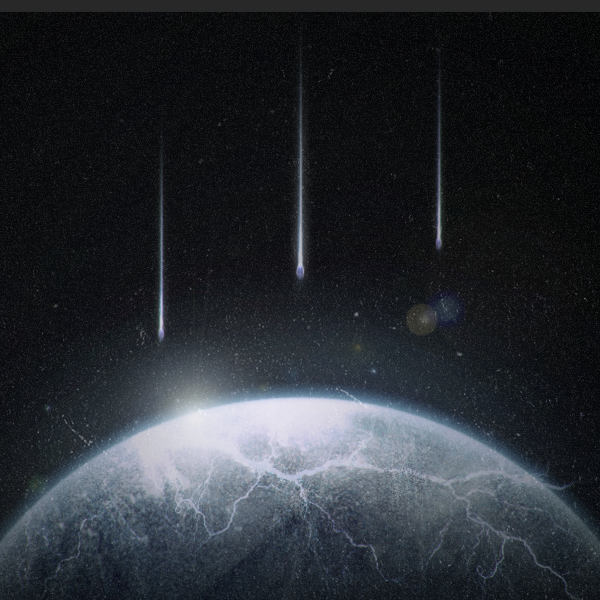 Launched from an orbiting voidship, these deadly drop pods are sent by Space Marines to help wreak havoc on the planet below. Upon landing, these pods unfold to reveal five deadly assault cannons hiding within. They can provide supporting fire in multiple directions, broadcasting sweet Imperial dogma as they massacre opponents foolish enough to approach.

Take note, Deathstorm units only provide brief support with the pod’s limited ammo, so be tactical in when and where to deploy them. 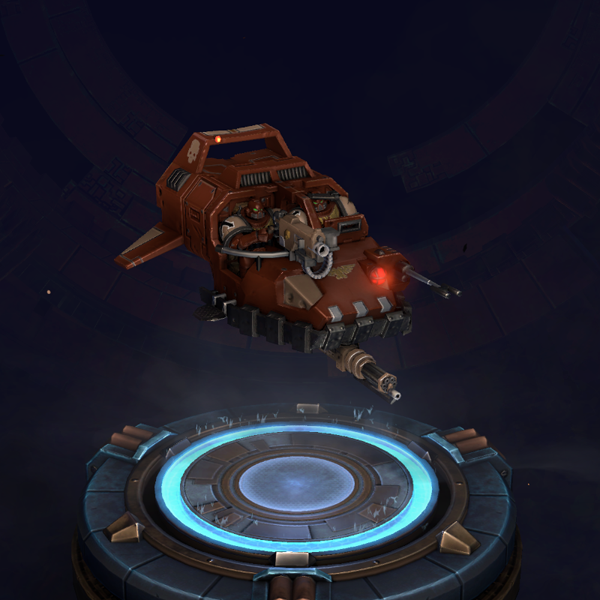 These light-weight anti-gravity vehicles are the Space Marines’ key reconnaissance units. Known for their speed, these ranged skimmers are primarily used to scout out enemy territory before an attack. In case of emergency, these fast-paced speeders can be sent down from orbit to help lay down suppressing fire on enemy infantry. These versatile units can be upgraded to mount a Multi-Melta Gun, making its already long-ranged weaponry even more formidable. 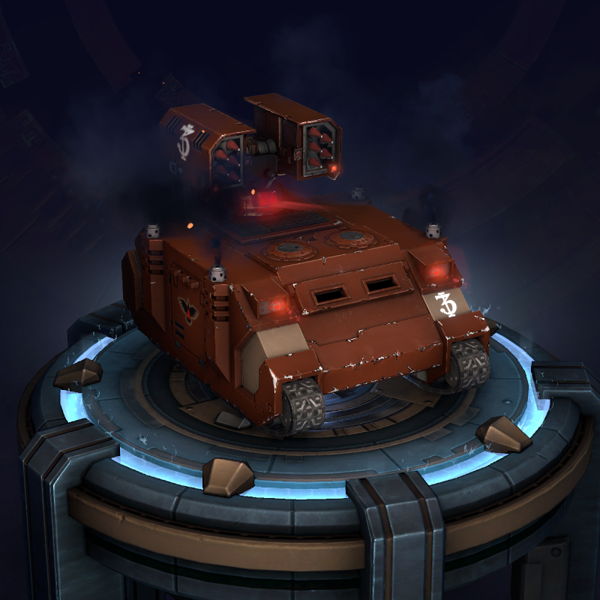 As well as deploying heavily armed tanks and walkers, the Space Marines are renowned for their lethal artillery units. While their missiles may not be quite powerful enough to weaken heavy vehicle armour, Whirlwinds are known for their ability to decimate waves of infantry. Using its missile barrage ability, this unit can make short work of unsuspecting ground troops, allowing clever tacticians to swiftly clear a path for a full frontal assault. 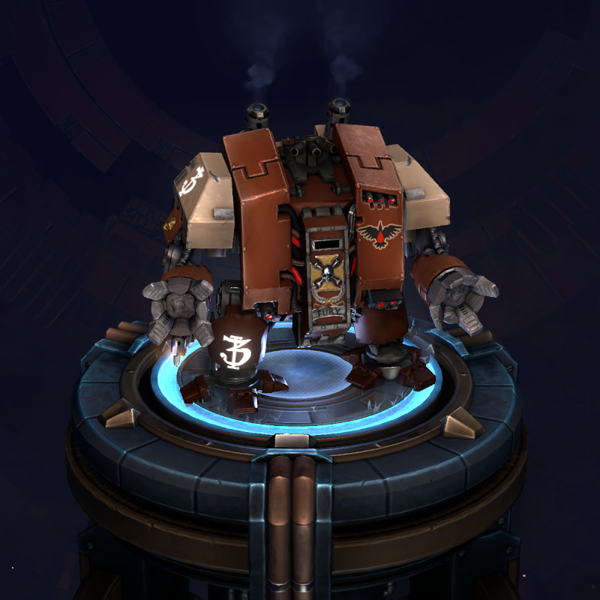 Dreadnoughts are arguably the Space Marines’ most fearsome units. These gigantic combat walkers are a terrifying sight to behold, armed to the teeth with a wealth of heavy weapons mounted on their hulls. Sharing a cybernetic link with their pilots, Dreadnoughts are piloted by the grievously wounded heroes of the chapter, awoken from centuries-long comas for this sole purpose.

These melee mechs use their brunt to slow nearby squads, charging enemies at full speed with their mighty frames. The walking battle tanks can also cause considerable damage to foes simply by slamming the ground beneath them. The impact of their landing can knock back and slow helpless infantry, with the sheer force of its slam - even capable of stunning nearby vehicles. 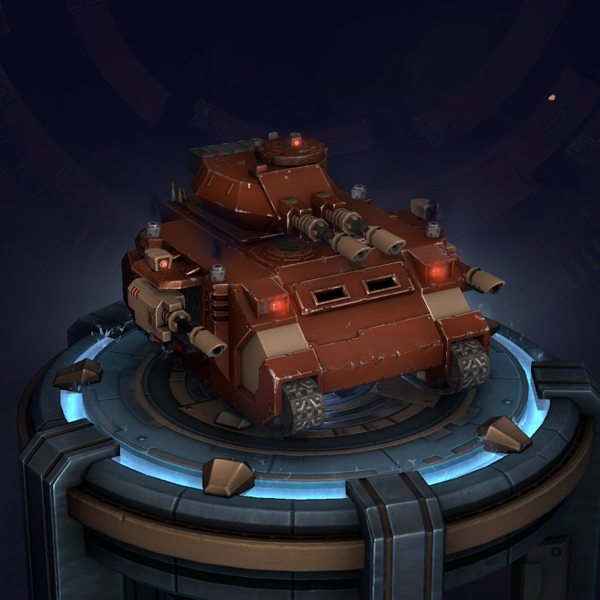 Predator Annihilators are the Space Marines’ latest tank unit. Armed with twin-linked Lascannons mounted on its turret, these ranged vehicles are capable of dealing out a devastating amount of destruction over long distances. 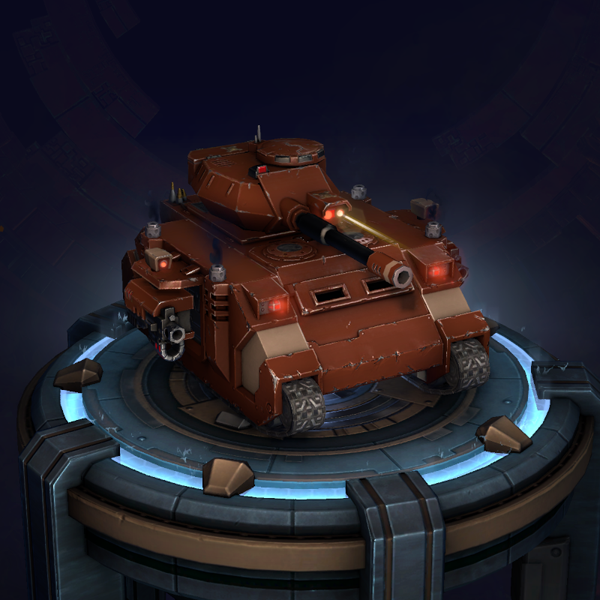 Equipped with two side mounted heavy bolters and a potent turret-mounted autocannon, the Predator Destructor dishes out anti-infantry damage in a circle around its target.